There has been a lot of eating going on over the past few weeks, lots of home made food, lots of the usual stuff  (Zizzi, Pizza Express, Wagamama, Haz), and a few interesting eats, which I’ll talk about here.  So the first one was… wait for it… a vegetarian pizza restaurant!  So this place is apparently the third in a chain, and not only is it vegetarian, but Indian – which means that you can order pizzas with lots of coriander or paneer!!

Mr Singh’s is just outside Gants Hill tube station, we rocked up early (pretty early, around 6pm) for dinner.  We were the only ones there to sit and eat, but it filled up quickly.  There were lots of people taking away or picking up orders.  The menu is great – not only do they do pizzas, but burgers, wraps, lots of sides and lots of desserts.  I decided to go for the vegetarian hot, with red onion, sweetcorn, mushrooms, peppers, jalapenos and fresh green chillies, sans cheese.  They do a soy based vegan cheese, but I’d rather go without.  My mama ordered a vegetarian supreme, which was essentially the same as mine, but without the green chillies, and obviously with cheese.

It was only after I ordered I read that pizzas are deep pan, but you can request thin crust (which is my pizza of choice).  The deep pan was about a centimetre thick, really well cooked and crispy – so no complaints there.  I usually top my pizza with chilli oil, chilli flakes, and whatever else there is – but this time, I didn’t have to.  The pizza was SO good – and the generous amount of green chillies really hit the spot.  Super tasty!  Definitely coming back here to try the other stuff on the menu.

Next? The food stalls at Spitalfields Market and Boiler House.  Well we did check out all the fashion stalls – there is so so much there, all quirky and different, teeming with people – but I was here for the food.

There was something for everyone – virtually every different type of cuisine and dish available, and everyone, well, almost everyone was happy with what they got.  I wanted to check out the vegan burgers at Pomodoro e Basilico.  I had been seeing these ‘cheesy/mozarella’ sticks that they sell on social media for so long, I really wanted to try them – so I ordered one.. It looked like the real deal, tasted like the real deal, the only problem for me was that it was under seasoned.  All it needed was hit of salt.

They also do different kinds of burgers, either with seitan or jackfruit.  They even do a sweet burger.   I went for ‘The Good’ with a seitan beef patty, beetroot ketchup, garlic mayo, cashew cheddar, carrot bacon, lettuce, tomato and onion. There is a lot of effort that goes into these burgers, but for me, it was too sweet!  The bun was sweet, and the beetroot ketchup and carrot bacon just enhanced that.  Also, my patty was really really small.  I think that if the patty was bigger and thicker, it would change everything about the burger. 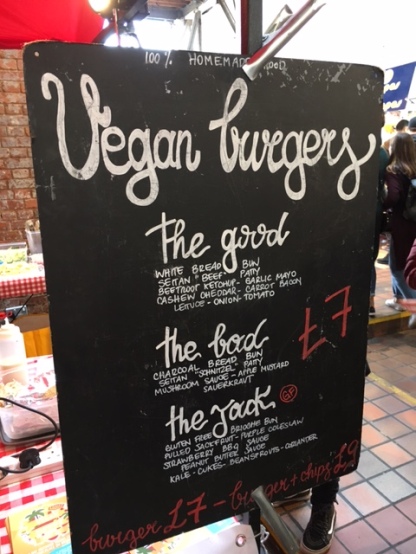 We also went for a slice of the spinach, peanut butter and banana cake.  Amazing texture, moist, but it could have been a bit sweeter for me.

So some stuff was too sweet, some not enough sweet or salty – but overall, quite pleasant.  I will try them again though, and compare the difference to this time…

Next highlight – din din with the cousins.  We wanted to go to Iberica, but they didn’t have any availability until 10pm, so we ended up going to Sabor Iberico – tapas too, but much more rustic, cheaper and cheerful.  It was a lovely place, lovely staff and a typical menu with all the expected fare… but what was unexpected was a lovely gin menu, with my favourite tonic(s) – Fever Tree.. I went for a Portobello Road Gin, which was jolly good. 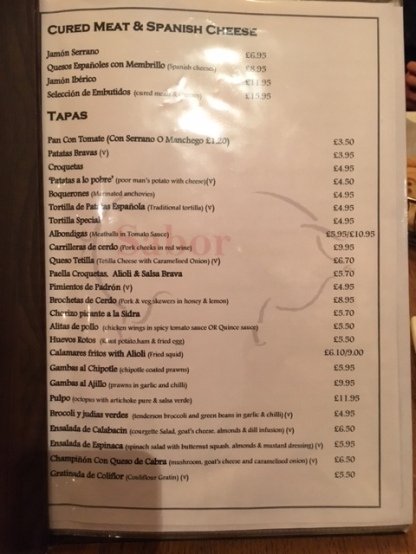 There were a few meaties and I think they ordered the calamari and chorizo, but there were loads of veggie/vegan options.  Olives – fat, juicy and so moorish.  Delish! The pan con tomate was sensational – we ordered some plain and some with manchego cheese.  Fresh tomatoes, fresh bread – it has got to be one my favourite tapas dishes.  We also went for patatas bravas (acceptable), ensalada de espinaca with nuts, butternut squash and a really good whole mustard dressing.  The padron peppers were appropriately charred, with a sprinkling of paprika..mmmmm.  I was happy. 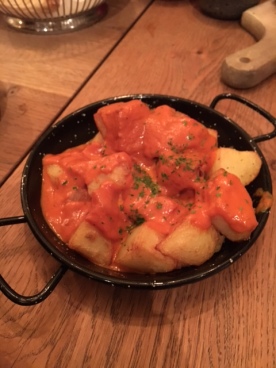 Other veggie dishes ordered were the tortilla with cauliflower (hmmm), the feedback was that it was ok.  What went down well though was the broccoli in a nice buttery sauce, and a dish of mushroom and goats cheese.

Sadly I couldn’t partake in any of the desserts, so I settled for a cup of hot water with lemon (they had run out of fresh mint!) and watched the girlies enjoy the churros and tarta de Santiago – and boy, they did.

Sabor Iberico was really reasonable, the food good, the desserts and gin heavenly – will definitely return for a cheap and cheerful and tasty meal.

So those have been some of the eats (to be honest, the ones where I remember to take photos of, haha).  I’ve been busy planning travelling phase 2 – Asia it is and some of the countries have been decided on, but I’m also doing a bit of ‘going with the flow’… I leave in 2 weeks – and I can’t wait! Whooo!

© PB Eats, PB Travels. Unauthorised use and/or duplication of the text or any photos without express and written permission from this site’s author is strictly prohibited. Excerpts and links may be used, provided that full and clear credit is given to PB Eats, PB Travels with appropriate and specific direction to the original content.
Loading Comments...