Since we were in Tromso for just a week, we planned our itinerary to ensure that we do at least one activity a day, and today’s was supposed to be cross country skiing.  I say supposed – because as the keen amongst you may have figured out – it didn’t happen.  Reason: no snow.  No Snow?!?!? We’re in the Arctic Circle! Apparently everything is a month late, so there hasn’t been much snow because it has been warmer than usual at this time of the year.  Yes. Warmer than usual.  This meant that our activity turned into a snow hike. 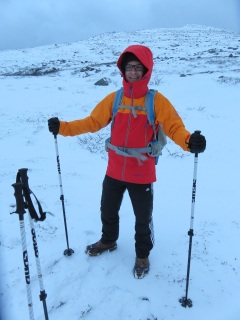 So after a late breakfast and a leisurely morning, we waited for our guide, Michael from Tromso Outdoor.

It turned out the only people booked in were the three of us – private tour…perfect!  This is the place you need to go to for a number of tours, but more importantly, ski and snow gear – everything – that you can hire for very reasonable prices.  Definitely worth looking into when you’re planning your visit.

We drove out to Kvaloya, the Whale Island and found a suitable snowy hill to hike up – crampons, hiking poles and all.  The views were magical – both on the drive and hike. 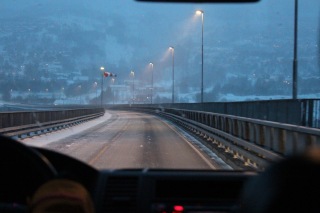 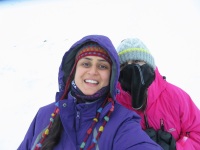 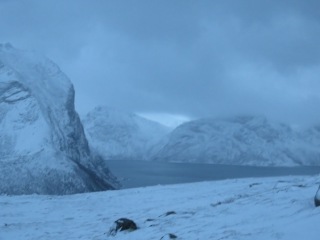 So utterly breath taking and I enjoyed every single minute of it – so calming and peaceful.  We made it back to the car where a hot drink was waiting for us – which was essentially hot Ribena, exactly what was needed after a long hike.  The girls also got to have some Lefse, which was the standard snack on the Tromso Outdoor tours – essentially a bready pancake sandwiched with a buttery nutmeg mixture.  Obviously off limits for me, I came equipped with my current favourite, a Primal Pantry Cashew and Almond bar.

We got back to the hotel, changed into our robes and off to the sauna on the top floor for a bit of muscle loosening action – which we needed more than we realised! 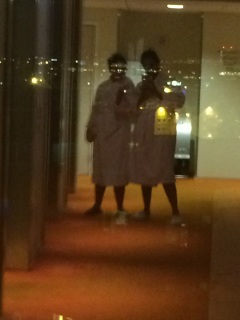 Being a Sunday, we were told that there were literally only 4 restaurants and coffee shops open in Tromso – so we decided to go one that was open as we didn’t want to eat in the restaurant.  We found Aungarden, which was sadly a slaughterhouse in a previous lifetime. 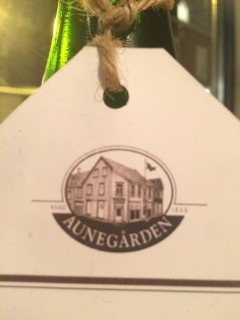 It had a relatively simple menu, and literally nothing that I could eat.  However, as I was realising, Tromso is very accommodating and when I asked if I could have a veggie salad – there was no problem in getting one 🙂 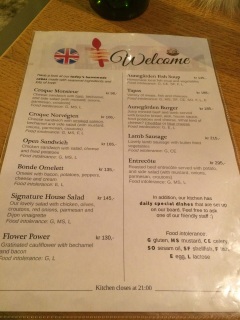 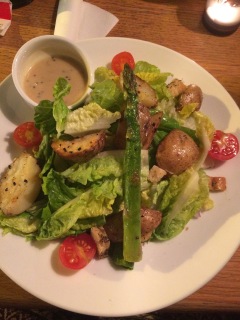 Most enjoyable, and exactly what I needed, although I could have done with more asparagus!

The next day was another activity, M & I were off to see the famous Norwegian fjords and S was off Husky Sledging.  Breakfast was more or less the same, literally nothing to write home about.  We were booked on the Fjord tour with Enjoy The Arctic and we were picked up by our slightly crazy guide Anna.  So being in the Arctic, we went from not having enough snow to ski to a proper snow blizzard – so much so that Anna was convinced that we’ll drive to Kvaloya, hang around for 20 min and drive back.  She was wrong! What I also realised about being in the Arctic, is how quickly the weather changes! It suddenly cleared up and we were left with relatively clear skies! Result.

The scenery was nothing short of magical – it was literally like being in another world – I think the daylight – or the ‘sun doesn’t rise above the horizon’ light had a lot to do with it. 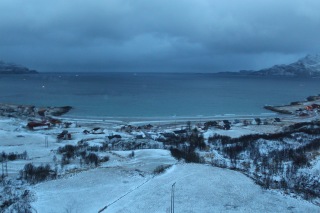 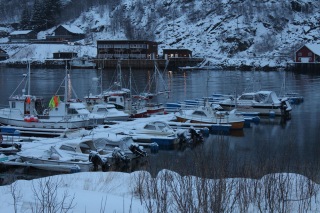 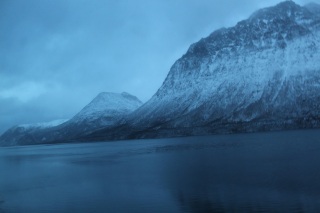 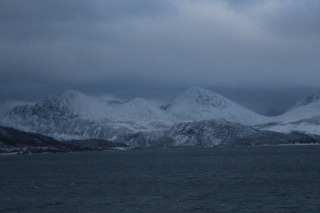 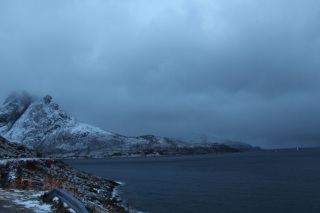 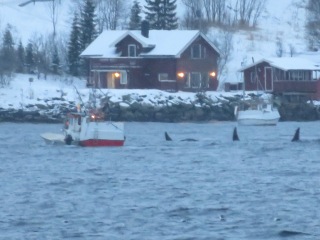 We spent the morning driving, stopping for photos, driving to another fjord, repeat.  The views were just stunning – breathtaking.  When we got to kattfjord, Anna started squealing – why? Whales!!  We saw a massive pod of orcas!!  Apparently seeing so many, so close to the shore is very rare – she called it the viewing of the season – and who are we to complain! 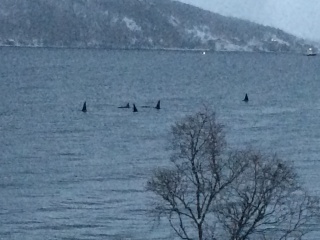 Next stop – a frozen lake that we had a snowball fight on – or rather, where I attacked M slap bang in the face with a snowball (sorry! forgivve meee! ;).  Fight aside, at the risk of sounding like a broken record – the views! Standing on a frozen lake, surrounded by mountains was very humbling 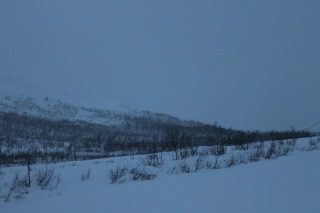 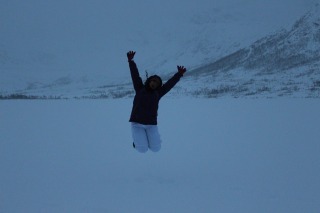 Penultimate stop – Summaroy, or the summer island.  Apparently this is the place that people hang out in the summer, have picnics, swim in the sea, because it gets to a balmy 15 degrees!  Now if you look at these photos, you might think you’re on some tropical beach (replace clouds with blue skies). 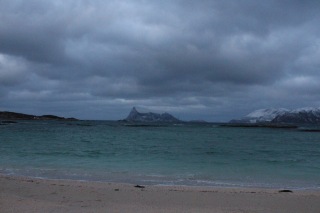 It might have looked like that, but the gale force arctic winds stopped it from feeling anywhere close to that. 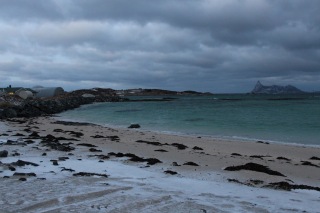 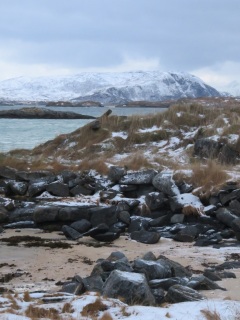 Don’t be fooled, that wasn’t surf on the beach – it was snow!  This is the first time I’ve seen that combo! 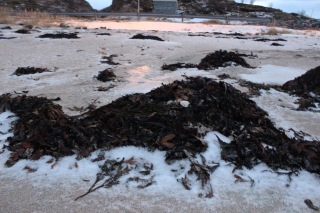 Final stop –  another beach, where Anna attempted to light a fire and cook our snack.  Hot dogs in wraps for the meat eaters, along with a stick of dried reindeer meat, which M dutifully informed looked and tasted like pepperami.  For me – a vegan burger, which, in that cold and after 4 hours of sightseeing was very welcome.

Talking about cold – I donned a thermal suit on top of all my layers and my salopettes and my ski jacket – I was the Michelin (wo)Man!!! Getting the thermal suit on could actually be a separate blog post on it’s own, but I’ll spare myself the pain of that. haha! 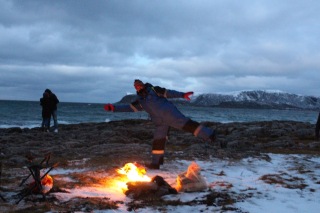 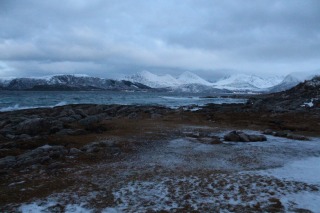 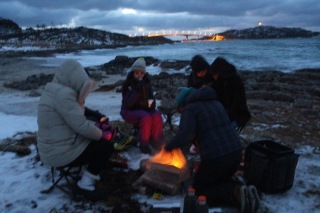 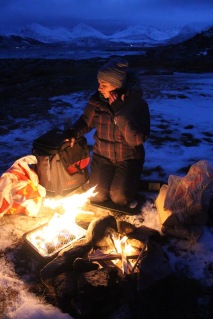 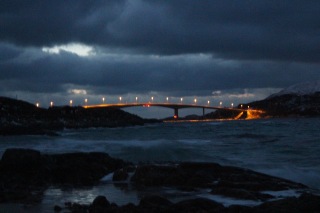 After the meal, the snow started again, and we endured a scary ride back to our hotel – driving like maniac on icy roads was our final adventure experience for the day – thank you Anna!
We were all exhausted, so we nipped into Pastafabrikken, which was literally a minute’s walk from our hotel. 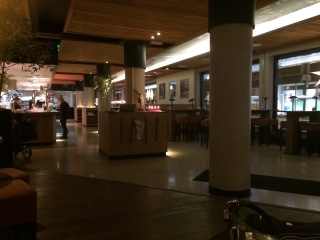 It is one of those Scandi cool places in terms of decor and style, and I knew that with an Italian-esque menu, there would be something I would find to eat. 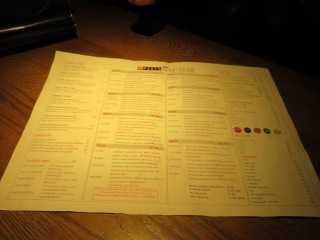 My bowl of veggie soup arrived with a load of crusty bread. For £11, it was absolutely delicious, packed with lots of vegetables – and one of the cheaper meals we had!

Another fine day in Tromso, this one full of mind numbingly (is that a word? It is in my world!) beautiful nature, breathtaking sceneries, adventure and a hot bowl of soup! Thank you Universe!!