Today’s plan was to check out the reindeer, and spend the rest of the day basically being lazy. We had booked a tour with Tromso Arctic Reindeer for a Reindeer and Sami experience.   Once again, we were picked up from the hotel (yay!), this time in a coach with about 50 other people.  We drove just 25 minutes outside Tromso city centre to a custom, tourist made, Sami/Reindeer site.

We met our hosts, a lovely Sami man and his fiance in a giant lavuu that had a roaring fire.  They were traditionally dressed and looked very attractive. 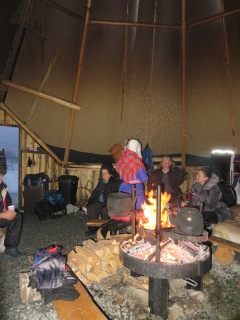 We were first going to feed the reindeer and then come back to a Lavuu to have some lunch and to hear about the Sami – history and current situation. So, equipped with buckets off feed, off we went to feed the greedy reindeer.

After a couple of minutes holding the bucket and being pushed around, I’d had enough of the feeding and switched to taking pics. 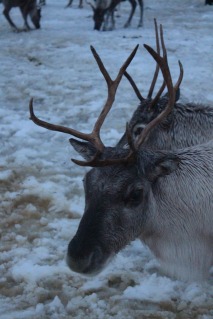 We then wandered back in the lavuu for a truly interesting talk on the Sami, their history, what they wear, their accessories, how they protect themselves in this harsh environment. Very informative and enjoyable.  As for the food?  A reindeer stew which was strongly ‘scented’ (being polite here), and a veggie, dairy filled cous cous option. So no food for me.  The best part of the day was the Sami talk – and that was it really.  But if you do want to get close and personal to lots of reindeer, then definitely do this if you’re out there.
We got back to the hotel for 2pm, did a bit of packing, and a bit of window shopping.  So far we haven’t done any serious shopping yet, other than buying lefse and Kvikk Lunsj, Norway’s answer to Kit Kat.  But first, a coffee in a deli, Mathallen.  This was a beautiful space, with lots of tempting items to buy, but all we wanted was a coffee.

So after a quick espresso (not the worst, but not the best) + a couple of pieces of salted almond chocolate (from Copenhagen), and we were ready to wander for a couple of hours before dinner. We were hungry, since we hadn’t had lunch (M didn’t want to try the reindeer soup – and S wasn’t joining us, she was going for Northern Lights part deux) but we thought we could hold out.
We found a spa to book a massage for the final day of the holiday, went to the polar museum and the tourist shops to check the tourist tat – and boy, there was a lot of it out there.  It was really enjoyable walking around, and we also nipped into the library and chilled and read a few comic books – brilliant.  One of guides told us that you can borrow a book from any town or city in Norway and return it in another. So I could borrow a book in Tromso and return it in Oslo…how cool is that!
So after reading Nordic anime-esque comics about Thor’s daughter and Vikings, off we went to Kafe Globus (or if you’re M, it’s bobus/nobus/anythingbutglobus rofl rofl) a cafe with international cuisine that had.. wait for it.. VEGAN CUPCAKES.  Whoop Whoop.
A beautiful space once again, with a very relaxed vibe.  Very reasonable, cheaper than most other places we visited.  See what you want, order, pay and sit back and relax.

I ordered a ginger beer..mm.. zingy..

And a middle eastern plate with extra falafels.  It came loaded with a salad, tabbouleh, olives, beetroot, pickled veggies.. and houmous. YUMMY!   I love that stuff and I eat it virtually every day – so not eating it for almost a week and then getting it… I was one happy bunny.  As for the rest? Fresh, crunchy, spicy, juicy… most enjoyable.

M’s plate was identical – but with extra chicken and yogurt dip.

Suitably full, I made sure I left room for dessert – vegan chocolate cake accompanied by a jasmine tea.  It was a big hunk of cake with icing – and yes, I ate it all.

We waddled back to the hotel – not because we were stuffed. Well, okay, that was partially the reason, but also because the roads were so icy and we were being careful 🙂

On our last day in Tromso, after a late start and a leisurely breakfast, we did some shopping and took a final walk around the city centre.. so pretty! 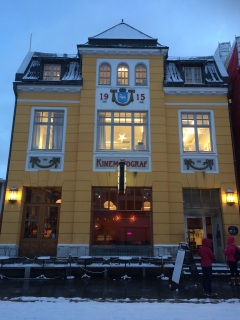 Time for our final meal in Tromso – lunch at what is supposed to be one of the best restaurants in Tromso, Emma’s Drommekjokken, or Emma’s Dream Kitchen.  Another small restaurant, no more than 15 tables, but beautifully done up.

The menu here was also short and sweet, and they had a vegan option (with houmous!!) with me even asking for one 🙂 The owner mentioned that the Head Chef has worked with Jamie Oliver and it was Jamie’s influence. Go Jamie..

We started off with a glass (or two) of sparkling wine..

My meal with essentially a salad with hummus and roasted root veggies – ginormous and oh so tasty. Every mouthful was full of texture and brimming with flavour.

The girls went for the baked clip fish, sitting on a mound of creamy mash.

No room – or time for dessert, we paid about £48 each and legged it to Essens Spa for a massage.  My masseuse was also a physiotherapist, so my massage turned into a proper deep tissue, painful at the time but so relaxing afterwards massage.  It cost £80 for 45 minutes, but it was exactly what my muscles needed!

So leaving the spa completely relaxed, after 2 days of chasing, Wandering Owl said they couldn’t leave my scarf anywhere convenient (for them!!) so M and I spend 40 minutes power walking up and down a very steep hill to a residential part of Tromso to retrieve it.  Letter to self – don’t forget anything when you go on an activity with them!

All in all, Tromso was seriously enjoyable, there is so much to do and it is a beautiful city.  It isn’t a place for a budget holiday, nor is it a place where you’ll be rushed.  So after Day 1, we settled into the flow of Tromso, relaxed and went with the flow – and we were all better for it 🙂