I met up with M for our annual Christmas dinner (yep, in January – thank you cold/flu virus for making me miss it in December).  Ever resourceful, she suggested Grain Store – a restaurant with lots of options for the dietary fussy amongst us.

Now Grain Store is one of those painfully hip places, the staff, the menu, the cocktail list (they have savoury cocktails! Aubergine Rum! Horseradish Vodka!).  Too much hard work to go through the list – so we settled for a celebratory glass of prosecco 😉  Thankfully the food men was less complex, full of yummy stuff. 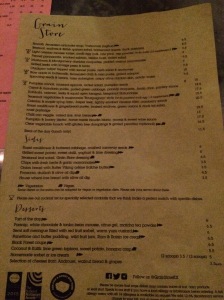 We both loved the look of the desserts (parsnips in a dessert! So hip!) so we decided to forgo starters for mains and dessert. It was a toss up between the chilli con veggie or the veggie bourguignon and the lovely waitress did say the chilli was a better option – decision made for both of us.  What arrived were 2 piping hot skillets – one with mixed rice (brown, white, wild) and one with the chilli (the pot of white fluff in the middle was sour cream).

Oh boy. I was impressed. The chilli was full of flavour and warming spices, all complementary and subtle. Super delicious.   Moving on to desserts. I really wanted to try the “Coconut & Kaffir lime green tapioca, sweet potato, banana crisp”.  I thought it was a very intriguing bunch of flavours and textures – and  I also like tapioca (never been scarred via school dinners – was it really that bad??) so it was a no brainer. M went for tart of the day – apple bakewell, served with a coulis and creme fraiche, which looked LUSH.

As for my dessert, WOW. It was sensational – other than the banana crisp which I though was a bit stale so didn’t eat it. But the rest of it – wow. Umami flavour explosion. I can’t even explain how tasty this was – so different yet so comforting, it was more like a chia seed pudding than a tapioca pudding. Exceptionally delicious! 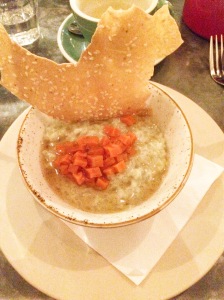 Accompanied by a cup of fresh mint tea, and I was a happy bunny.  All in all, a really really good meal.  I definitely want to go back to try the other stuff on the menu.

© PB Eats, PB Travels. Unauthorised use and/or duplication of the text or any photos without express and written permission from this site’s author is strictly prohibited. Excerpts and links may be used, provided that full and clear credit is given to PB Eats, PB Travels with appropriate and specific direction to the original content.
%d bloggers like this: