OK. Now this day was epic.  I would recommend this activity to everyone who visits Tromso, even the locals love it.  We were staying in the Radisson Blu, which was a brilliant choice as it was the pickup point for almost all activities, and pretty central.  Come to think of it, I can’ think of a hotel that won’t be pretty central 🙂  Breakfast was included, and if you eat everything, then there was a lot of variety.  For me, breakfast virtually every day was cereal with fruit (they had soya milk – win!) 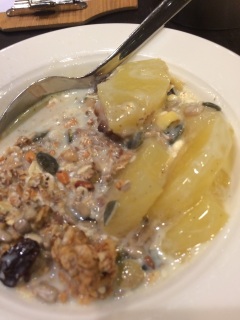 Or roasted tomatoes on toast (don’t knock it until you’ve tried it).  Over the week I did supplement it with my handy pip and nut peanut and almond butter squeezies, along with some supermarkets bought Alpro soya yogurts and avocado.

And the bread. Oh. The. Bread.  Different kinds, rye, wheat, nuts, seeds, unidentified ingredients, but all so good.  First activity of the day (as per our customised itinerary, thank you M) was on the Vulkana for.. wait for it… a spa day! on a boat! 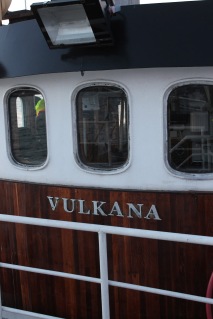 So we boarded what looked like a normal fishing boat.. if you can call having a hamam, sauna and hot tub normal!

You can just see the wooden tub at the back of the boat – but look inside – chill out zone!

The views from the hot tub were amazing.  The sun never rises above the horizon at this time of the year, and this means that the sky looks amazing – pink and blue on one side, orange and yellow on the other… stunning! 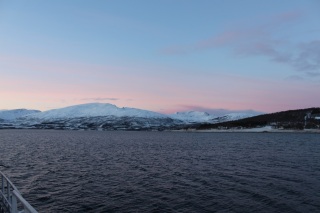 We spent 2 hours alternating between the hot tub and the sauna.   I must say it was very surreal sitting in a hot tub with a woolly hat, and then drying off in the sauna. 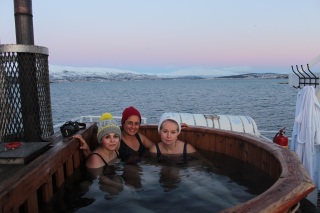 The crew was relaxed, looked after us but mainly left us to our own devices.  Halfway through they wandered over and asked very casually if any of us fancied a dip in the Norwegian Sea?  Erm, yes we did!   There was a ladder off the side of the boat and just taking off my fluffy gown gave me the shivers.  So before I had time to change my mind, I took the plunge.

I was okay for literally 2 seconds – and I even swam around – another 5 seconds and then that was it.  Pins and needles, toes and fingers were getting numb and that was it.  I was swearing all the way back up the ladder (only to distract myself from freezing!).  It took me 10 whole minutes in an overheated sauna.  I thought I was crazy but S went in after me – and then she warmed up and jumped in the sea again!! Impressive.

After warming ourselves up, we joined the other guests for lunch.  There was fish stew for everyone else, and I was given a giant sandwich – that amazing bread, and stuffed with veggies and loads of avocado.

No complaints here.  We had lunch with 5 other Norwegian girls who recoiled in horror when we told them we went to Peppes.. and they were so LOVELY, they gave us recommendations on decent restaurants and coffee shops, and more importantly, the ones to avoid – we definitely referred to that list!  I so recommend Vulkana – oodles of fun!
Next activity – walking tour of Tromso.  It was 2.5 hrs long and very entertaining.  We walked around the city centre (not very big, but beautiful), the Polar Museum, one of the Town Square where there was a Christmas Market. 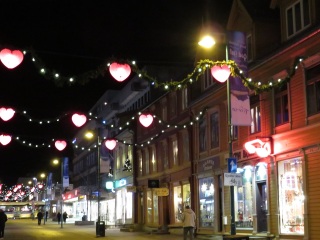 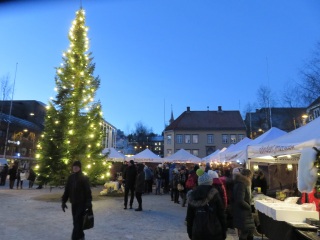 Next stop – NORTHERN LIGHTS, third activity of the day.  After a quick stop at the hotel so that we could layer up even more (I felt like the Michelin (wo)Man all through this holiday), we got picked up from the hotel at 6.30pm.  Our guide was Markus from Explore the Arctic was very helpful – a whizz with sorting out SLR settings and had the loveliest Norwegian accent, which I instantly became obsessed with.. and which M and I then tried to copy (unsuccessfully) for the rest of the holiday 🙂

We drove for about an hour and a half before we stopped – to be honest we didn’t have the best conditions to see the lights and to be honest, I was expecting them to be as vivid as all the photographs I’ve seen – they weren’t to the human eye, but on camera – wow wow wow. 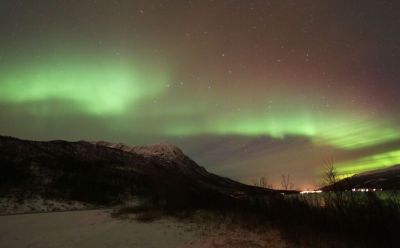 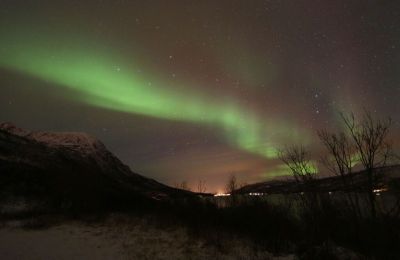 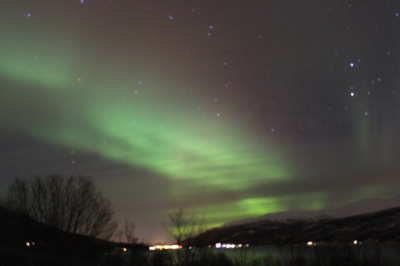 We stopped at some point for a hot meal – Markus and the (superman) driver built a campfire sans gloves (!!!!), and dished out cups of hot coffee (yes), hot chocolate (no) and hot tea (no), accompanied by a veggie pasta soup-y stew.
We got to the hotel around 1am – knackered after a very long day but very happy.
Advertisement

© PB Eats, PB Travels. Unauthorised use and/or duplication of the text or any photos without express and written permission from this site’s author is strictly prohibited. Excerpts and links may be used, provided that full and clear credit is given to PB Eats, PB Travels with appropriate and specific direction to the original content.
%d bloggers like this: